Photography Tutorial for Beginners: What is Aperture, Shutter Speed, ISO

Maybe you have heard something like this before: Â“The better the cameras, the better the photos.Â” In this effect, you might have thought of digital cameras. Many believe that these models are just a one-click away for great photos. Do you also believe on this?

Ponder on the following article and the appropriate answer will be revealed to you.

Some of the main advantages to digital photography are:

However, photos under low light and taken using film and digital models are both susceptible to artifacts or granularity. Images taken by both cameras appear to be very similar can be further improved with the advent of software that can improve and manipulate the quality and details of images.

Furthermore, you can take lousy shots with the most expensive Nikon models and make great photos with the passÃ© point and shoot cameras. It suffices to say that it is not the camera that solely makes great and even picture-perfect images. The man behind the camera can squeeze or miss a big time out of the gadget that he has.

The following presents a ten-point aid that will enable you to take photos like a pro using your digital cameras. Practice on these tips so you can maximize the expense of your gadget.

1. Those Tones Should Warm Up

Change your white balance setting from auto to cloudy when shooting sunny landscapes and outdoor portraits. This increases the yellow and red tones, thus resulting in warmer and richer pictures.

2. Use a [Sunglass] Polarizer

A polarizer should always come in handy when taking those general outdoor shooting. Polarized shots have more saturated and richer colors because unwanted reflections and glare are minimized or even removed.

If your digital camera can not accommodate a polarizer, simply place a sunglass as close to the camera lens as possible making sure that the rims of the glass will not be taken along with the image. The effect of a polarizer can be maximized when the light source is perpendicular to the object.

One of the most useful and amazing features of digital cameras is the flash on or fill flash mode. This feature allows you to take control when to use the flash. It simply goes on whenever you want it available. This helps in capturing great outdoor photographs.

The camera exposes for the background first then adds enough flash to illuminate the subject when you are using the flash on option. Wedding photographers have been using this technique for many years to create professional looking portraits where everything in the composition is simply excellent.

To come up with a more relaxed photograph, try putting the subject under the shade and use the flash to add illumination.

You can also practice on using rim lighting where the sun illuminates the hair of the subject from the side or the back.

However, you should not stand that far away when using the fill flash since most built-in models have a range of 10 feet or even less.

I am quite sure that you would want to look at the fine details of your surroundings but would not be willing to crouch down and lie on the ground with your belly.

In that case, you just have to look for the macro made or close up symbol, usually a flower icon, and get as close to an object as possible. Once the confirmation light signals you to shoot, just press the shutter down to record the portrait.

However, using the close up mode allows you to have a shallow depth so you can concentrate on the part of the subject that you want to emphasize and let the rest go soft.

5. Chaos of the Horizon Line

There are still photographers who become disoriented when lining up their shoots. In other words, once they look at their cameras monitor, images that are erect seem to be a little tilted or bowed inward.

The most appropriate way to take care of this matter is to take your best shot at a straight picture, then take another picture after repositioning the camera. Afterwards, you can delete the others once you feel you captured a perfectly aligned image.

Also, just practice level framing your shots until you become acquainted with the process.

Then you do not have to miss another shot because your card is full.

7. Not High Resolution All the Time

It is more advisable to squeeze more images by shooting a low quality and resolution settings than taking shots with a high resolution all the time. This way you can reserve a space and a 2272 x 1704 resolution on the next great image of the century and enough for the portrait to be printed on a 8Â” x 10Â” inch paper suitable for framing.

However, if you have enough memory (and you should), there is no reason to shoot at a lower resolution and risk missing the chance to display your work the big way.

Tripods are Â“unnecessarily bulkyÂ” for some so seldom do people like to bring them around.

Nowadays, there is an ingenious way to settle the dilemma whether to bring a tripod around or to do without it. The UltraPod IIÂ™ developed by Pedco fits in your back pocket and holds your camera steady in various situations.

You can use the VelcroÂ™ strap to attach your camera on a tree limb or an available pole. Its legs can be opened on any flat surface or even on a boulder.

Now, you can be a real photographer without carrying a heavy burden.

9. The Fun with Self Timer

Another under-used feature on almost every digital camera is the self timer. This function can be used to save the photographer for missing the picture by delaying the firing of the shutter up to 10 seconds.

You can attach your UltraPodÂ™ to ensure that your camera will not be taken away that easily by some strangers. Of course, you need to aim at the subject and not at a distant background before setting up the timer. Also the depth of the subject should be checked too.

By using self timers, you can also avoid accidentally jarring the camera when you are interested in making long exposures of cars driving at dusk as you initiate the focus.

Normally, you will use an exposure of one second or a bit longer to create the flowing effect of water. In this case, you have to look for waterfalls or streams that are under the shade.

One trick is to use a polarizer or your sunglasses to darken the scene and create a longer exposure. More so, this technique can also eliminate distractions from your portrait.

For a really good photographer, which implies using creativity and ingenuity, viewers often get curious and ask, Â“What sort of camera model do you have there?Â”

Would it be more humbling for them to hear that you are using a normal aim and shoot model?

Or you can simply say, Â“Model ME.Â” 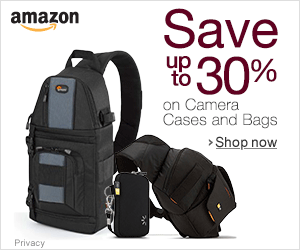 We have always found that looking at objects from another perspective...

Maybe you have heard something like this before: Â“The better the...

Digital photography can be maximized to its full potential once you...

With the explosion of digital cameras choices, photography has never been...